In a wide-ranging interview aired Sunday, Meghan described painful discussions within the Royal Family about the colour of her son’s skin before he was born and how the intense pressures of royal life led her to contemplate suicide.

“They didn’t want him to be a prince or princess, not knowing what the gender would be, which would be different from protocol, and that he wasn’t going to receive security,” The Duchess of Sussex told Oprah Winfrey, referring to Archie.

“In those months when I was pregnant, all around this same time — so we have in tandem the conversation of, you won’t be given security, not gonna be given a title and also concerns and conversations about how dark his skin might be when he’s born,” said Meghan, who is biracial.

She declined to say who had aired such concerns. Asked by Winfrey if she was silent or had been silenced, she replied: “The latter.”

Meghan told Oprah Winfrey that the Royal Family didn’t want her and Prince Harry’s son to be made a prince or receive security partly over concerns over how dark the baby’s skin would be. 0:15

Meghan also she had suicidal thoughts and considered harming herself after asking for help but getting none. “This was very, very clear … and very scary,” she said.

“I just didn’t want to be alive any more. And that was a very clear and real and frightening constant thought. And I remember how [Prince Harry] just cradled me.”

WATCH | Meghan says she thought about suicide during royal life: 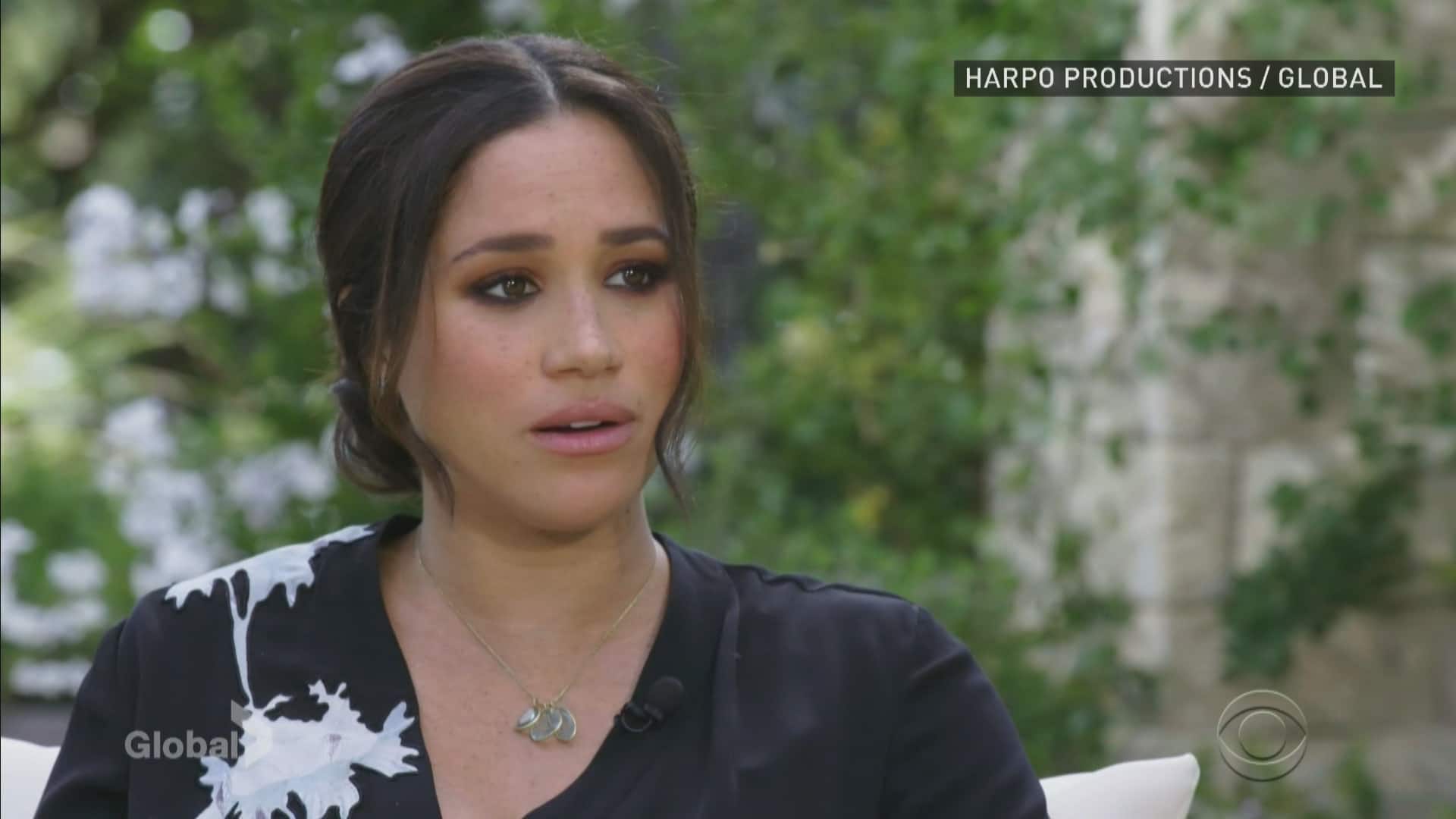 The Duchess of Sussex told Oprah Winfrey that she had asked for help from the Royal Family for her mental health, but received none. 0:22

Harry, who joined the interview halfway through, said his father — Prince Charles, the heir to the throne — had stopped taking his calls when he and Meghan decided to step away from their royal duties.

The Duke of Sussex, who announced that he and his wife are expecting a girl this summer, said that he felt let down by his father and that his late mother, Princess Diana, would have been angry and upset at the way the Royal Family had treated his wife Meghan.

Harry told Winfrey that he would not have stepped back from the royal family had it not been for Meghan, because “I was trapped but didn’t know I was trapped.”

“I feel really let down because he’s been through something similar. He knows what the pain feels like,” Harry said of his father. “I will always love him but there’s a lot of hurt that’s happened.”

“My family literally cut me off financially,” Harry said. “But I’ve got what my mum left me and without that we would not have been able to do this.”

Earlier, Meghan said the Royal Family tried to silence her and people within the institution not only failed to protect her against malicious claims by the British press but lied to protect others. 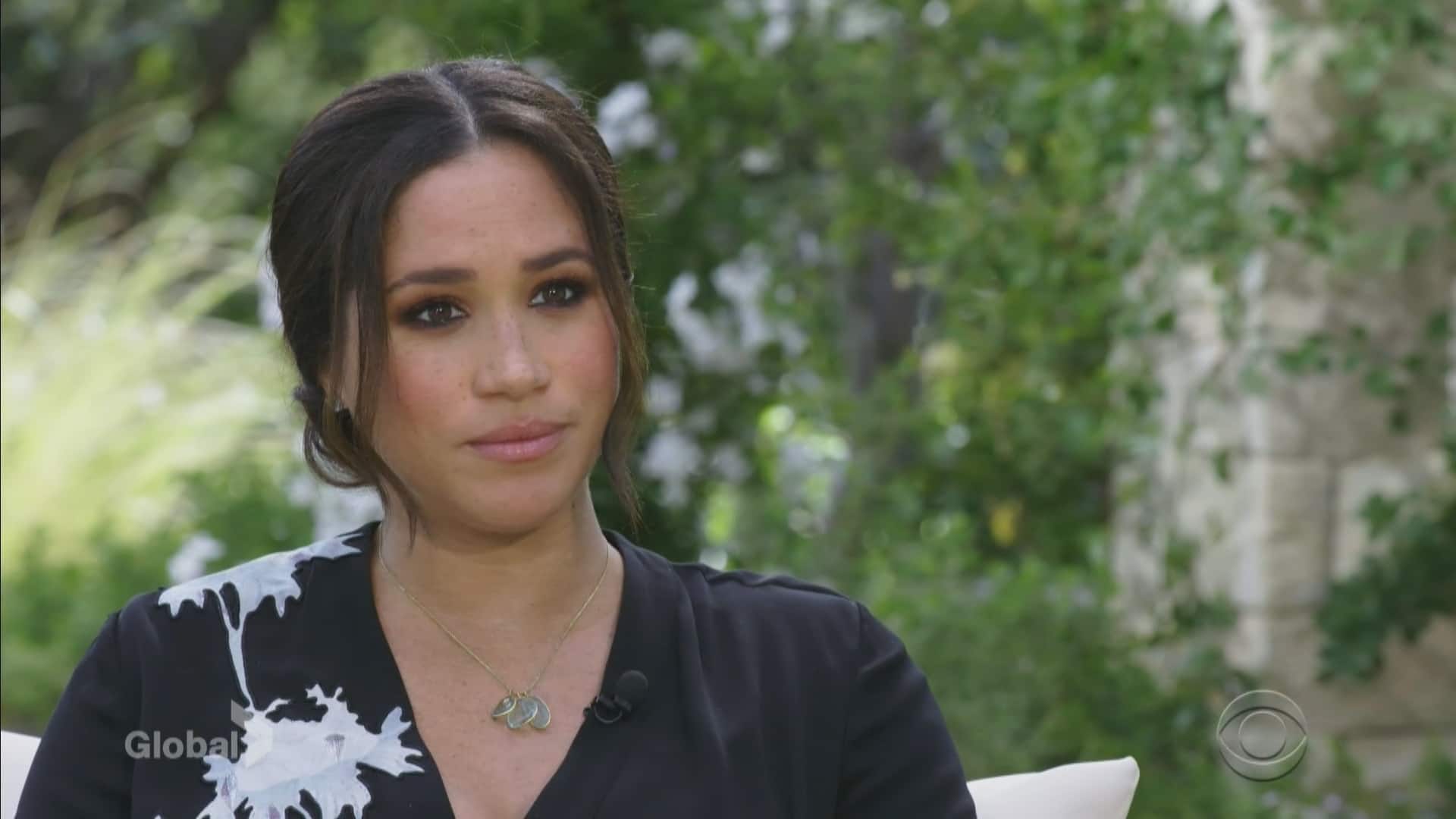 The Duchess of Sussex told Oprah Winfrey that things started to worsen with the Royal Family after she and Harry were married. 0:23

“It was only once we were married and everything started to really worsen that I came to understand that not only was I not being protected but that they were willing to lie to protect other members of the family,” Meghan said.

“But they weren’t willing to tell the truth to protect me and my husband.”

Harry also denied blindsiding his grandmother, Queen Elizabeth, saying he had too much respect for her.

Asked why Charles had stopped taking his calls, Harry said “by that point I took matters into my own hands.”

“It was like, I needed to do this for my family. This is not a surprise to anybody. It’s really sad that it’s got to this point, but I’ve got to do something for my own mental health, my wife’s and for Archie’s as well.”

Meghan also refuted British tabloid reports that she made her sister-in-law Kate, Duchess of Cambridge, cry before her 2018 wedding, but rather that the reverse happened.

Meghan told Winfrey that Kate subsequently apologized and she forgave her. But when tabloid stories emerged purporting the opposite, Meghan said that marked a turning point for her relationship with U.K. media, and said she would have hoped Kate would have wanted the story corrected.

“What was hard to get over was being blamed for something that not only I didn’t do, but that happened to me.”

The show, which included Winfrey’s interviews with the Duke and Duchess of Sussex, aired first in the United States — Meghan’s home country — and Canada at 8 p.m. ET. British audiences will wake up Monday to headlines and social media posts about Winfrey’s special, but won’t be able to see the full interview until Monday night when it airs on ITV.

Meghan told Winfrey that she realized life as a royal would be different than she anticipated when her future husband asked her if she knew how to curtsey before meeting Queen Elizabeth.

“There was no way to understand what the day-to-day was going to be like,” Meghan told Winfrey.

“I went into it naively,” she said about joining the royal family.

Meghan, who said she was not being paid for the interview, also said she and Harry were married by the Archbishop of Canterbury three days before their public wedding. She called that day an “out-of-body experience.”

Where to get help: